Father John Misty’s third album Pure Comedy is one of the most critically-revered albums of the year. Music sites such as Rolling Stone, Paste, NME, Uncut, and Stereogum deemed Pure Comedy as one of the fifty best albums of 2017. The critical love is tepid compared to Tillman’s last outing I Love You, Honeybear but still substantial enough to be worth addressing at the end of the year. There is still a large section of music sites like Pitchfork that did not include Pure Comedy on their EOY lists, so certain listeners must find something lacking in Tillman’s attempt at a social critique magnum opus. I considered including Pure Comedy at #50 in my albums list just out of my sheer fascination with his entire endeavor, but there was too much on the album I could not forgive. I do actually recommend spending some time with the album as some of the more nauseating word dumps in the second half can grow on you. Ultimately though, Pure Comedy is just an admirable misstep that only intermittently strikes chords of post-Trump American frustration and anxiety. Furthermore, the actual music almost always comes second to Tillman’s messaging, which splinters off line-to-line.

[Photograph by Paolo Kudacki for GQ]

First, the positive side of Pure Comedy: the first four tracks are essential listening. The album begins ominously with sinister carnival sounds that fades to make way for the ringleader himself – “The comedy of man starts like this.” The title track is Josh Tillman at his best – exuding confidence out of his comical-prophet persona while still conveying a powerless frustration from not being able to change a damn thing. “Pure Comedy” was the lead single, and in my first few listens, it was underwhelming musically yet overwhelming thematically. On I Love You, Honeybear, his lyrics were often devoted to small moments – the incorrect use of malaprops, Rorschach sheets of ash and cum, his thoughts when a woman is astride him, etc., but on “Pure Comedy” he decides to focus on the history of humanity. It grew on me though with the context as the album opener, and the line “OH! It’s like something that a madman would conceive!” had some staying power in 2017.

Next up is “Total Entertainment Forever,” which is easily the most accessible track on the album. The brass section halfway through is also the most exciting instrumentation choice here (that’s not saying much). His lyrics are also relatively-focused on digital obsession and content over-saturation. Props to Tillman for succeeding in this thematic field in the same year that Arcade Fire face-planted with Infinite Content.

“Ballad of the Dying Man” was the Pure Comedy track I listened to the most. The piano and acoustic guitar curate a softer melody that helps the listener ease into Tillman’s lyrics. The song is a scathing take on himself and anybody that believes in changing the world with their takedowns and critiques. He sings from a dying man’s perspective who never realizes – or at least realizes too late – that he offered nothing original. The void he leaves behind with his words will immediately be filled. “Ballad of the Dying Man” acts as a warning to anybody that finds their satisfaction in their supposedly-expert opinions. It is the digital age; anybody can be an expert with a little effort. This song hit me close to home.

[Father John Misty at the Ryman; photo by Kate Cauthen for Speakers in Code]

I saw Father John Misty perform live at the Ryman this year. He is a fantastic live performer who puts a lot of attention into lighting, instrumentation, and set design. He is an exciting dancer, too. I went to the performance a little worried that it would be all Pure Comedy tracks or he would play the 13-minute acoustic-slog “Leaving LA.” Thankfully that did not happen. He did start the show with the first four tracks off Pure Comedy like it was its own perfect mini-album. He certainly would have lost most of his audience if he went any further. From there, he played a mix of all his greatest songs, which there is a surprising amount considering he only has one great album to his name (I Love You, Honeybear). After the opening, Pure Comedy took a backseat in his show with the Fear Fun hits receiving the most audience reaction. It was clear that Pure Comedy tracks like “So I’m Growing Old on Magic Mountain” could not instantly connect with people like “Hollywood Forever Cemetery Sings” or “Real Love Baby.” 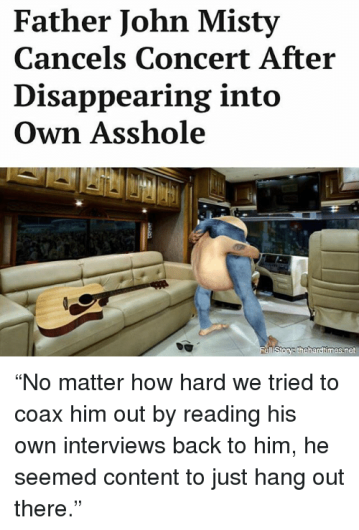 So what about the other 55 minutes or so of Pure Comedy? The last nine tracks all fall between 800k to 1.8 million streams on Spotify, so none of the tracks stand out based on mass appeal. “Leaving LA” does stand out at 13 minutes, and “Two Wildly Different Perspectives” was a single, but neither has received commercial or critical love. It could be easy to argue that Pure Comedy turns into a whole lot of nothing by the end. That’s not the whole story as there are lyrical elements that can be exciting to dig into, but for listeners who would rather enjoy their music than read it, Pure Comedy is worth skipping after “Ballad of the Dying Man.”

The 23-minute stretch of “Birdie” to “A Bigger Paper Bag” is the biggest crime here as it derails a potentially-great album. The music in this stretch is simply lifeless. Pianos, guitars, and violins meander along as sad sack Father John Misty takes over with apocalypse-fearing lyrics. The mixing may be at fault here as Tillman’s wordy, unmelodic vocals drown out any instrumentation. The pace never picks up enough to bring back any listeners that tuned out after the first verse.

After that stretch is “When the God of Love Returns There’ll Be Hell to Pay” which somewhat rights the ship. It is nearly a retread of “Pure Comedy” where the speaker acts as some intermediary messenger to both defend and judge humanity. This stance by Tillman is egotistical for sure, but the details he focuses on makes it admirable in his self-glorifying way – prisons, capitalism, theft, ravaging the land, etc. This was one of the few songs from this late in the album on Tillman’s setlist at the Ryman. After the last line “And to make something out of nothing sounds like someone else I know,” a guy sitting across from me gave a soft “wow.” That type of tepid enjoyment is also about as much as I could muster from the second half of Pure Comedy.

Pure Comedy continues on in this manner: slow, monotonous, boring, and yes, lyrically-acrobatic and philosophically-challenging. Praise for the album sometimes focuses on how it takes many listens to enjoy it, but that is only applicable to the first four tracks. Praise for Pure Comedy mainly focuses on his social critiques and that he never truly sets himself apart from his criticism; nobody is above blame in Tillman’s view.

This is all fair praise, but I would believe it more if Tillman did not make most of it so inaccessible. Praise for Pure Comedy reads like a book review because Tillman places his words front and center. Unquestionably great artists like Joni Mitchell can garner these book-review style reviews as well, and they do not truly get at what makes their music essential. An album’s quality does not solely hinge upon the lyrics and themes; they can be vital, but they must work on that subconscious level, where the melodies and rhythm make your feet tap or your head bop uncontrollably. The effort in music reviews should be placed on training yourself to hear what naturally works in the melodies and rhythms rather than forcing out a thematic argument, but artists like Father John Misty condition us to approach differently. Listeners that refuse that approach had a stronger negative reaction to Pure Comedy. It is telling that in all the year-end love for Pure Comedy, music sites that highlight electronic and experimental music more like Crack Magazine, FACT, Gorilla vs. Bear, Tiny Mix Tapes, and Pitchfork all did not include Father John Misty in their EOY album lists. The same goes for my list. Unlike any other album in 2017, Pure Comedy highlighted that uniform listening habits do not exist and that we are separated by what we choose to emphasize in music.